Last year I participated in the 4th FLOW conference in a roundtable titled “Micropolitics in a Digital World“. Given the conference’s scheduling just before the 2012 U.S. elections, the panel sought to ask what were the implications of digital media for local, fringe, or other alternative publics and politics. Its two guiding questions were: How do we bridge the gulf between the scale of national party politics and the intensely local political practices that may more directly shape our lives? How do these kinds of political organizing shape our understanding of the multiple interlocking public spheres we inhabit? 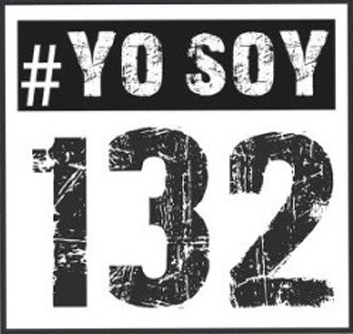 Although the roundtable was clearly geared towards American politics, I was interested in it because earlier in the year Mexico had had its own presidential elections, and for the first time, Twitter (and social media generally) had become a notable component of the public debate. I applied with a response paper on the role of class and access within the digital public sphere, and specifically focused on the #YoSoy132 movement, which had rapidly gained notoriety in the months leading up to the election. The full position paper can be found at Academia.edu

My contention at the time was that the lack of access and the varying degrees of media literacy within Mexican society transposed the class divides of the offline world into the digital realm. I would argue that this view still holds, with two major caveats. First, I neglected to consider the fact that most new online connections in Mexico were mobile, so the contrasts between those with access to the internet and those with a television might not have been that large—though still considerable.

Second, and partly as a result of my participation on the roundtable, I’m more hesitant to assume that a lack of total inclusion in debates occurring in online social media necessarily translates into an unsuccessful political endeavour. At FLOW, another panelist suggested that politics in social media were, intrinsically, not as useful as offline political movements, that the only—or, at least, the most meaningful—change would come from people on the streets making demands and changing public policy. I remember disagreeing with such a characterisation, principally on the grounds that effecting change on a large scale to the lived political reality of a select group—for instance, teens lobbying and getting a GSA group in their small, rural community—would be as valuable as large-scale shifts to public policy, albeit in a different way. In retrospect, this argument could be used to counter my own initial proposition that lack of inclusion in social media debates was tantamount to a failed political project.

To be sure, the fact that access to online social media is highly stratified is a huge problem, and one that will continue to shape what social media can be and could do. What I would now hold is that, this problem notwithstanding, there is considerable value from engaging in the sorts of micro politics that social media currently allows. That is, as questions around impact are geared towards measurements of breadth versus depth, I’m beginning to wonder whether Twitter’s impact could be better theorised in terms of the latter rather than the former. And I’m interested in understanding how this would affect how we study social media’s impact in our daily lives. How are measures such as impact, success, or change more dependent on abstract ideals rather than real-life results? More importantly, to what extent are these ideals based on incorrect, or incomplete, understandings of the reach and strength that social media interactions can have on people’s daily lives? I hope to continue these lines of thought as I continue to study Twitter and its political uses.

During the winter term, I took a class on sound and struggles with Prof. Kay Dickinson at Concordia University, and for my final project I created three video essays for a series entitled The Drag Queen’s Throat, where I explored issues of space, time, and representation related to sound studies through the cultural figure of the drag queen. The project description and statement can be read here.

Today is my last day working at the offices of the Fantasia Film Festival, so it seems fitting I post the last clip from my chat with David Bordwell. Here are parts one and two in case you missed them.

I chose to post this question last because it both fits nicely as a bookend to my festival internship, and relates back to the two projects I have been working on during the summer (hey, remember those? me neither). The question is, what do you see as the importance of genre film festivals within wider film festival circuits?

Personally, I would love that the notion of genre cinema eclipsing auteur cinema were true, even if this idea is A) largely unquantifiable, and B) paradoxical in the case of film festivals. As Cameron Bailey of the Toronto International Film Festival recently lamented, auteurism has a strong hold on film festival programming, and shows no signs of letting go. This is not so different for genre film festivals, where works by Takashi Miike, Nick Frost, or William Friedkin are foregrounded. The corollary to Bordwell’s assertion is that filmmakers already considered as auteurs are now interested in making genre films. It’s a promising tendency, and one that might interestingly result in bridging the gap between highbrow art cinema festivals and popular genre film festivals. (Whether bridging this gap is a desirable development is a whole other issue, and certainly open for debate.)

Even more compelling is the idea that genre films are a gateway to audiences engaging with world cinema at large. Given genres’ reliance on conventions – however broadly defined – it’s encouraging to think that a shared cinematic language can overcome linguistic barriers. This year I saw Lobos de Arga (oddly translated to Game of Werewolves for anglophone audiences), which paid homage to both the British Hammer films and the  American werewolf films of the 80s. Sure, subtitles were essential for the dialogue, but the most hilarious set pieces were action-heavy, and these translated quite well on their own. It’s no surprise that it won a Fantasia audience award.

I often forget to include the ‘International’ part of the name Fantasia International Film Festival, and wrongly so. Film festivals are a notorious outlet for international films, and, as Bordwell points out, world cinema is increasingly becoming genre cinema. If audiences are rapidly engaging with films from around the world by virtue of genre commonalities, it’s probably time film theorists do so as well.

As I mentioned in my previous post, I had the opportunity to chat with David Bordwell for a few minutes while he was attending the Fantasia Film Festival. Once all the required questions were out of the way, I managed to sneak in a few that related to my own interests. In the following clip, I ask about the master class he presented on Hong Kong Cinema while at Fantasia and what he considered to be the importance (and/or appeal) of these master classes.

I have to admit that, beyond the obvious fact that he had done a master class himself, I was inspired to ask this question because of renewed discussions on bringing academic research to the public. Much in the way Anne Helen Petersen argues for the value of academic blogging in her article “Media Studies Makeover“, I wanted Bordwell to elaborate more on the public reaction to his academic research. Alas, the time was short and I wasn’t able to continue the conversation in this regard. It would’ve been interesting to know more about the reaction that a (primarily) non-academic public had had to his lecture and, since I know he brought up that he had a blog, whether people who had not known about it before were now actively interested in it.

That said, his broader point about audiences wanting to engage with the films beyond just watching, and how film festivals allow for this, is similarly interesting to me. This could simply be a matter of getting fun behind-the-scenes stories, like watching Danny Masterson explain what a dance belt is during the Q&A of Alter Egos, but it could equally mean getting insight into the multiple spheres that these films (and their sources) inhabit. In examples from just this year at Fantasia, I can think of Todd Robbins explaining that his role in Play Dead (the film he was presenting at the festival) is played by Miguel Pizarro in the Mexican stage version of the show. Robbins explained that Pizarro once attempted suicide, so the latter’s participation in a show that invites you to think about death was all the more compelling. Another example was Jennifer Lynch explaining the struggle to change the NC-17 rating of her newest film Chained. Hearing her so passionately describe the experience was illuminating of both the twisted system that is MPAA ratings and of the frustration that befalls artists when bureaucracy gets in the way of them presenting their work.

These are things that many audiences want to know to more fully understand the wholeness of cinema. And, as Bordwell points out, film festivals, DVD commentaries, and public lectures make them all the more accessible.

Working at Fantasia this summer, I had the chance to meet international directors, TV stars, and – briefly but memorably – celebrity academic David Bordwell. As part of the festival, Fantasia’s YouTube channel is dedicated to two-minute capsules of conversations with all the invited guests. I volunteered to be the interviewer for the David Bordwell capsule, which you can see here:

Well, that was fast. Truth is, our chat (because it was, in fact, not too long) was just under ten minutes. For the festival’s channel, there was only time to speak about Fantasia and the award he was receiving. However, I managed to sneak in a couple of questions of my own and will be uploading some highlights to my Vimeo.

The first one relates to Chris Marker, who passed away while Fantasia was on. In his honor, the festival programmers decided to host a special screening of La Jetee, and since this coincided with David Bordwell’s arrival, he was asked to introduce it. Here’s the clip where he talks a bit about Chris Marker and the continued influence of La Jetee:

More highlights, in which I selfishly ask about topics related to my own interets, to come soon!

This week’s topic was serious games. I have to admit I was greatly intrigued by the games we played (Darfur is Dying, Sweatshop) and readings but I remain decidedly unconvinced by both.

First, the readings: “The Effects of a Serious Game on Role-Taking and Willingness to Help” by Wei Peng, Mira Lee, & Carrie Heeter and “Political Internet games: Engaging an audience” by Joyce Neys & Jeroen Jansz.

I found two underlying assumptions that seemed problematic: the issue of technological determinism and the over-reliance on intentionality. Neys and Jansz do allude to the problem of technological determinism briefly and in their last paragraph. In spite of this, I found both their article and the Peng, Lee & Heeter one to be significantly slanted towards a technologically determinist argument. The simple fact that the research question is geared towards investigating the effect that serious games have on political engagement and social change elucidates the fact that the focus is on the medium itself. Granted, both articles concede that the self-selection and control aspects of their respective projects could be influential in the positive results they saw in regards to the newfound social/political engagement of the players. However, I would argue that these limitations themselves are where the more compelling research question can be found. It is more indicative of the usefulness of serious games to prove that these incite politically apathetic gamers into social change than to prove that serious games can make already politically-minded people more interested in a particular cause.