In February 2019, Netflix chief content officer Ted Sarandos announced that Netflix Mexico would produce fifty television shows and films over the following two years, making it the platform’s international territory with the most targeted productions. The promotional video following the announcement features Sarandos driving around Mexico City, picking up six of the stars of Netflix Mexico original series, and engaging in a kind of carpool karaoke to one of Luis Miguel’s songs. By putting together these six actors, the video intends to showcase the diversity of content that the streaming service offers to Mexican audiences: reality TV, thriller, comedy, musical. Implicitly (and perhaps unwittingly), the promo also illustrates a key similarity among all these stars: they are all white.

In the spring of 2020, the whiteness of Netflix Mexico’s programming has returned as a topic of conversation. On social media, this renewed discussion has been bolstered by the trend of calling out “cosas de whitexicans,” i.e. media and cultural fads that foreground white (usually affluent) Mexicans. For instance, a widely popular tweet featuring the all-white cast pictures of La Casa de las Flores (2018-2020), Control Z (2020), Made in Mexico (2018), and Monarca (2019) points out that this is “what Mexicans look like according to Netflix.”

More notably, Netflix talent impacted by racism in production and reception contexts have unequivocally made their concerns heard. In a recent New York Times op-ed, the star of Roma Yalitza Paricio writes of the racist backlash on social media that she suffered following her Oscar nomination. (She does not mention the brownface sketch mocking her on national television or the actresses who allegedly conspired to prevent her from a nomination to the Mexican film awards). Amidst the summer 2020 Black Lives Matter protests, Tenoch Huerta (of Narcos: Mexico) tweeted “When you’re done supporting the much-needed anti-racism movement in the United States, can we talk about racism in Mexico? Or is that still taboo?” Long outspoken on the rampant racism in Mexico’s screen industries, Huerta repeatedly receives pushback whenever he brings up these issues on social media. Paradoxically, his association with Netflix has allowed him greater recognition to address issues of racial disparity even as the platform emerges as a prime example of these issues.

In my In Focus article for the Journal of Cinema and Media Studies, I argue that Netflix Mexico is a middle class platform in terms of access, content, and imagined audience. Stratified access to high-speed internet and prohibitive hardware costs means that only the middle- and upper-middle-class can afford to engage with the platform. Critics engagement with Netflix content tends to treat it as part of the “quality television” discourse, in contradistinction to the lesser-valued content on national broadcast networks. Netflix itself has played into these different class connotations in the past, such as when the platform sought to distance itself from Televisa’s streaming platform Blim by making fun of telenovelas. Understanding the platform’s class dynamics helps us make sense of its original programming decisions within the country.

Understanding Netflix Mexico as a white middle class platform has further implications for understanding its cultural work around the world. As scholars and fans have pointed out, white affluent protagonists have long been a staple of Mexican television giants Televisa and TV Azteca. Netflix Mexico, however, aims to interpellate an international, multilingual audience with its content. La Casa de las Flores may be a retread of the “new Mexican telenovela” of the 1990s, but the soundtrack and casting choices betray its aspirations to appeal to audiences in Zurich and Seoul alike. Notice also in the Sarandos promo video that, despite the titles in Spanish, all the actors speak fluent English.

The whiteness of Netflix Mexico’s original content represents the projection of intra-national racial hierarchies onto a transnational arena. The international territory with the most targeted Netflix original content proves to be only the latest site of struggle for actors and creatives of color seeking more diverse labor opportunities and for audiences seeking representations beyond the white and affluent global norm.

[The original post of which this is an expansion appeared on In Media Res‘ week on “Global Netflix.”] 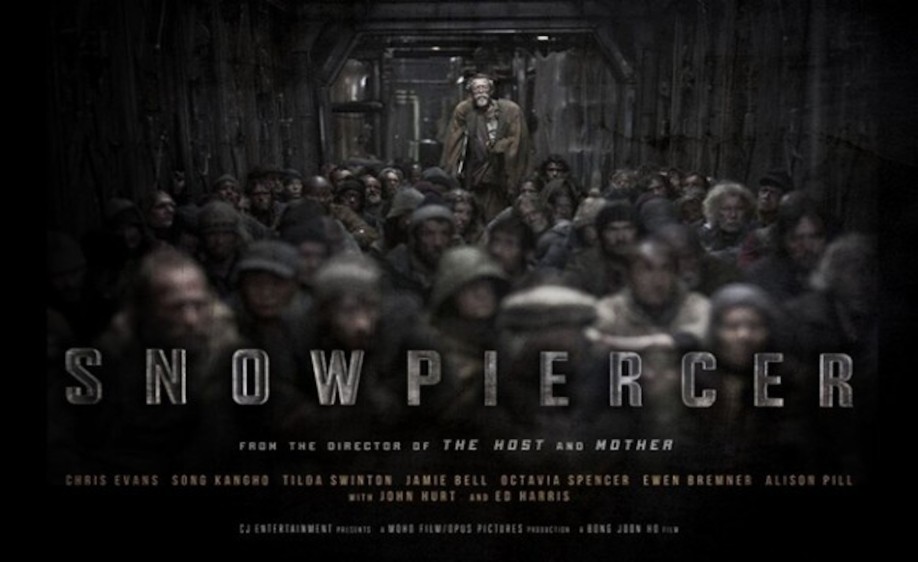 Two trains have commanded significant attention this past summer: the Snowpiercer, the fictional train in Bong Joon-ho’s post-apocalyptic film, and “La Bestia”, the freight train travelling from Mexico’s southern border to Mexico City. The first holds the last survivors of a global climatic catastrophe; the second holds hundreds of Central Americans hoping to immigrate to the United States. For these migrants, like the people at the back of the Snowpiercer, living conditions are deplorable. In his film, Bong introduces us to the passengers in a lineup during a routine check as they sit down, one row at a time, in a seemingly interminable fashion. As the images below show, the passengers of La Bestia are less orderly, huddling together as tightly as possible atop each freight car—after all, they are not supposed to be there. In both cases, the threat of death is nearly unbearable: for the fictional passengers, at the hands of stormtroopers; for the migrants, at the hands of drug gangs. So here they are, these two disenfranchised groups, aboard a train that could very well kill them yet, paradoxically, is saving them from the more dangerous alternative awaiting them if they got off it—inhospitable tundra in one, abject poverty in the other.

Hundreds of Central American migrants huddled atop the freight cars of La Bestia.

When did trains become figures of such precariousness? Although this favored symbol for modernity is not without its inherent sense of doom, as when Paul Virilio claims that the invention of the train is also the invention of derailment, the Snowpiercer and La Bestia are symbols of a crisis even before the potential wreckage of the machine. I suspect that what makes these two such powerful, harrowing figures relates to their allusion to movement devoid of progress, to time without change. Consider this opposing picture of trains invoked by writer Jessica Gross in a recent essay:

There is comfort in the certainty of these arrangements. […] Train time is found time. My main job is to be transported; any reading or writing is extracurricular. The looming pressure of expectation dissolves. And the movement of a train conjures the ultimate sense of protection—being a baby, rocked in a bassinet.

Surely this view is shared not only by writers—especially those signing up for Amtrak’s writer-in-residence program—but also by the thousands of people who prefer trains as their means of transportation. Trains can in fact be endless sources of joy and amusement. Perhaps this is why the Snowpiercer and La Bestia present quite the contrasting image: the movement of these trains does not conjure the ultimate sense of protection, but the constant sense of adversity; train time is not found time, but stolen time; the passengers’ main job is not to be transported, but to survive.

END_OF_DOCUMENT_TOKEN_TO_BE_REPLACED

It’s no surprise by now that Twitter has become a central medium for TV stars and creative types to interact with fans, critics, and potential audiences. It has also become commonplace for said actors to engage with audiences through live-tweetings of their shows, especially if they’re just starting out. In following the live-tweets of actor Robbie Amell during the first two episodes of his new show The Tomorrow People, I was struck by the prevalence of tweets calling attention to his shirtless appearances onscreen, and I began to wonder whether these might be symptomatic of particular types of practices in current social media usage.

#AmellWednesdays is a (surely intentional) piece of promotional convergence set up by the CW on Twitter to promote two shows in its Wednesday prime time lineup: Arrow, starring Stephen Amell, and The Tomorrow People, starring his cousin Robbie Amell. On one level, the reasons why these shows are placed together include this incidental extended family connection between their male stars and a broad thematic grouping of superheroes and/or people with superpowers. However, Robbie Amell’s self-referential tweeting about his shirtless appearances—the constant foregrounding of his physicality—provides another level on which to think about the connection between the shows. Arrow is notable among CW shows because of how central the main character’s physical fitness is to the narrative. As an (extremely wealthy) every man who trains himself to become a superhero, Oliver Queen has to be an impressively fit guy to carry out his adventures, and Stephen Amell’s body has to bear the representation of this character feature. The show rewards the actor’s commitment by constantly showcasing his character’s (and therefore his) body. The Tomorrow People requires no such specific character attributes since the main characters have superpowers unrelated to their physical prowess. Robbie Amell’s tweets, then, are a way to capitalize on the precedent set by his cousin’s show, and extend it to his own. #AmellWednesdays becomes not only a promotional gimmick, but a brand wherein the protagonist’s noticeable physique is intrinsic. END_OF_DOCUMENT_TOKEN_TO_BE_REPLACED