It’s no surprise by now that Twitter has become a central medium for TV stars and creative types to interact with fans, critics, and potential audiences. It has also become commonplace for said actors to engage with audiences through live-tweetings of their shows, especially if they’re just starting out. In following the live-tweets of actor Robbie Amell during the first two episodes of his new show The Tomorrow People, I was struck by the prevalence of tweets calling attention to his shirtless appearances onscreen, and I began to wonder whether these might be symptomatic of particular types of practices in current social media usage.

#AmellWednesdays is a (surely intentional) piece of promotional convergence set up by the CW on Twitter to promote two shows in its Wednesday prime time lineup: Arrow, starring Stephen Amell, and The Tomorrow People, starring his cousin Robbie Amell. On one level, the reasons why these shows are placed together include this incidental extended family connection between their male stars and a broad thematic grouping of superheroes and/or people with superpowers. However, Robbie Amell’s self-referential tweeting about his shirtless appearances—the constant foregrounding of his physicality—provides another level on which to think about the connection between the shows. Arrow is notable among CW shows because of how central the main character’s physical fitness is to the narrative. As an (extremely wealthy) every man who trains himself to become a superhero, Oliver Queen has to be an impressively fit guy to carry out his adventures, and Stephen Amell’s body has to bear the representation of this character feature. The show rewards the actor’s commitment by constantly showcasing his character’s (and therefore his) body. The Tomorrow People requires no such specific character attributes since the main characters have superpowers unrelated to their physical prowess. Robbie Amell’s tweets, then, are a way to capitalize on the precedent set by his cousin’s show, and extend it to his own. #AmellWednesdays becomes not only a promotional gimmick, but a brand wherein the protagonist’s noticeable physique is intrinsic. 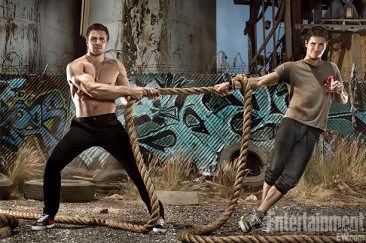 Shirtless scenes for its male actors are a staple of the CW given its target demographics and the young, attractive (and predominantly white) casts that populate its shows. The network has made fun of this convention with ads such as the “Give A Shirt” campaign, and Julie Plec, co-creator of The Tomorrow People, The Originals, and The Vampire Diaries, constantly humble brags about hanging out with hot actors. More generally, showcasing male actors’ physiques on television is nothing new, and long traditions extend all the way from soap operas to WWE matches which display the male body for various purposes.

What strikes me as most interesting in the case of the Amells is how, along with and partly because of the individualization and direct address enabled by Twitter, this showcasing of a (particular) male star’s physicality becomes more than a network staple or a genre convention, and turns into a way for the actor himself to promote his work, especially the very work that goes into creating and maintaining a specific physical figure. I refer to work here in two ways. First, looking as physically toned as these actors do takes a lot of effort (and, given the rise of millionaire personal trainers, a lot of money). Actors know that this is a necessary characteristic of the job and therefore subscribe to it, but since everyone is doing it, it’s an aspect that goes largely unacknowledged. Therefore, the second form of work referred to here is the concrete labor that this physical training constitutes. Labor that, I would argue, is distinct from cases of actors undergoing transformations for a role—such as uglifying themselves or becoming dangerously emaciated—because it is expected, commonplace, and unremarked upon for the most part. This isn’t the case of a star transforming himself for his art, but that of a paid actor/worker fulfilling the requirements that his job entails.

Given how often series get cancelled and how many young men are vying for only a handful of roles, it’s not surprising that actors nowadays take so heartily to self-promotion. The precarity of contemporary Hollywood celebrity status seems to demand it. But this form of work promotion I refer to is as much the result of the excessive demand of actors as it is enabled by the new forms of actor-audience communication. That is, since all (main) actors on a CW show are expected to subscribe to a certain look, there’s no singling any one out for meeting this requirement, so it befalls on the individual actors to foreground how their (physical) work matters. At the same time, social networking tools such as Twitter allow this foregrounding to take place in a more direct, instantaneous, and (herein lies a paradox) ubiquitous manner. If the number of actors actively noting how they meet their physical demands on Twitter reaches that of the actors on television, there’ll be no way of differentiating oneself from the rest of the labor force. The individual actor then has to resort to creative forms of foregrounding his work:

Of course, a similar argument could be made for other social media platforms, particularly Instagram, and for many other actors (though the fact that not many actors are doing so yet, or with such frequency, is perhaps why I noticed Robbie Amell’s case in the first place). Furthermore, I don’t intend to claim that all actors who do this sort of self-promotion would conceive of their social media interactions in this way, or even to the extent that I’m proposing. Instead, I am suggesting that we increasingly think of actors’ social media use as work, namely work about their work, and in doing so recognize how it is subject to the same pressures, uncertainties, and rewards as other forms of labor in contemporary society.